Where does me begin…

My interest in music was sparked when my aunts would play records; I joined them on the floor, listening to their curated picks and glossing over the album covers. Peter Paul and Mary, Broadway shows, and other pop music of the late 50’s and early 60’s. I liked what heard. As a child, music also became my refuge by going into a quiet room and making up frivolous melodies created out of an emotional response. This would prove valuable to me later on in life and music. 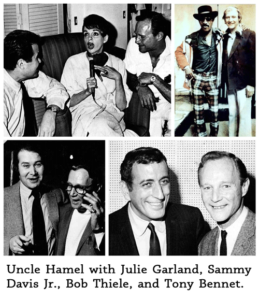 Perhaps the most seminal event to change my life is one of my aunts married Reice Hamel, a “remote recording engineer,” who recorded live music in nightclubs. He drove around with VW Van with recording gear that he configured for portability: tape machines, speakers, microphones, and a mixing console. Back in the day, there was nothing portable about a mixing console, they were huge and bulky. Because he was an electrical engineer in a previous life, he also knew how to tool sheet metal so he crafted circuit boards to fit into his portable one-of-a-kind mixer.

Reice recorded many great artists, including Judy Garland, B.B. King, Ramsey Lewis, Thelonious Monk, and a very young Barbara Streisand. But the most fascinating recordings were his jazz records. He gave me my first jazz records at the age of 8 years. I loved them immediately.

I spent several days making feeble attempts to recreate these sounds on the piano, but was unable to. Not to be dissuaded, I ended up taking piano lessons. To my chagrin, I soon realized that I hated practicing, nonetheless I entertained myself by making up things and imitating jazz as I knew it then.

During high school, my friends started a band. They already had a drummer, 2 guitars and a piano player, but no bass player. My friend Richard handed me the bass and said “you should play this.” From that moment on, I was smitten. The bass was fun and I took to it right away. However, true to my piano and guitar skills, I had difficulty learning bass parts. I stuck with it because I wanted to be in a band. I realized when I listened to music, I didn’t distinguish the parts, but rather just heard it as a whole event. At some point it started to click and I could start distinguishing the bass parts – I ran with it! 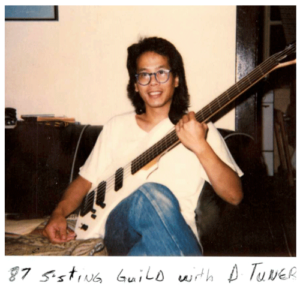 Fast forward… I’m now 18 years old and was still playing the piano, rather poorly I might add. Even though I managed to eek out bass lines and chords with some credibility I still wasn’t quite good enough to play in a band. At the same time I was teaching myself guitar with the same approach: fumbling with method books and begging anyone to show me a few things on the guitar. The guitar was portable and, for all intents and purposes, a way to “look cool.” Like the piano, my guitar skill were meek at best. Unable to learn any songs, I just made up my own.

After I had been playing the bass for 3 years, I decided to go to music school. I think my teachers knew I was lean on experience, but they allowed me to flourish in their classes regardless. Around 1977, I started to hear what I wanted to do on the bass in my head, but just couldn’t get the ideas from head to the bass. Little did I know that one day (twenty years later) my ideas would be realized on my 7 string bass.

Today, I’m still looking for new ways to push the envelope with my ideas. My bass guitar collection also includes a few 8 and 9 string basses, but they’re more for my personal pleasure of exploration. It’s been an interesting journey to find my voice through my bass – what I do with this instrument has very little to do with bass playing. It’s more about being my own little orchestra, writing and arranging on the instrument, for the instrument.